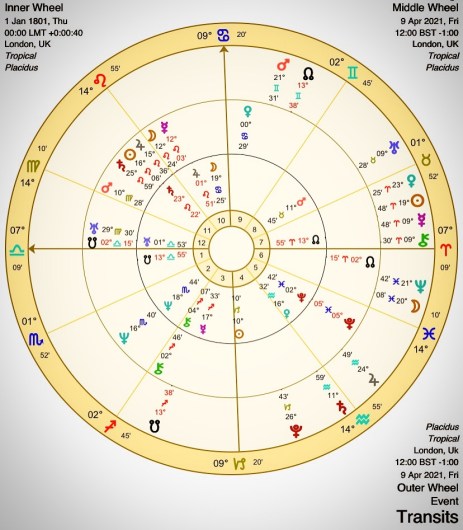 The 1801 chart is probably one of the most used by mundane astrologers.

In an article published last December, I outlined how this particular chart is currently developing an interesting Leonine concentration through Secondary Progressions. A Progressed New Moon will be exact this year, accompanied by Mercury, Jupiter and Saturn in the same sign. As I wrote a few months ago, this whole configuration carries a ‘royal’ flavour. In other words, we are possibly looking at the very early stages of a reformation of the British monarchical system.

Obviously, when we look at Progressed soli-lunar cycles, we have to consider a period of roughly 28 solar years; interestingly enough, this very cycle is similar in duration to the cycle of Saturn by transit.

As of now, the Progressed Moon of this specific mundane chart is at 12 Leo, in conjunction with retrograde Mercury and forming a square with national Mars in Taurus. Also, it is approaching an important triple conjunction with both the progressed Sun and Jupiter. This progressed New Moon will directly stimulate the national Grand Cross between Venus, Neptune, Saturn and Mars. All these factors enhance the visibility and importance of this astrological progression.

The current Saturn-Uranus transiting square is going to be stimulating those Fixed degrees in 2021/2022. Also, transiting Chiron is now square the UK Sun. Given the concentration of Leonine/Solar energy, there is a good chance that any upcoming major changes will primarily affect the monarchical system.

As expected, the royal family has been gaining quite a lot of visibility over the last few months. Perhaps the most significant event so far has been the recently announced death of Prince Philip.

In my article I highlighted how important these months are likely to be for Prince Charles, given the multiple activations of his synastry with the mother Elizabeth II.

Also, let’s not forget that 2032 will open a new Saturn-Uranus cycle. The actual conjunction will occur on Prince William’s natal Descendant in late Gemini. Also, his Cancer Sun has been Eclipsed in 2020. As faster planets will stimulate that very degree over the next few years, new doors may progressively open along his path.

Full Moon: the Healer and its Wounds Humanistic
US Mid-Term Election Astrology

Comments (5) on “The UK and its Progressed New Moon”